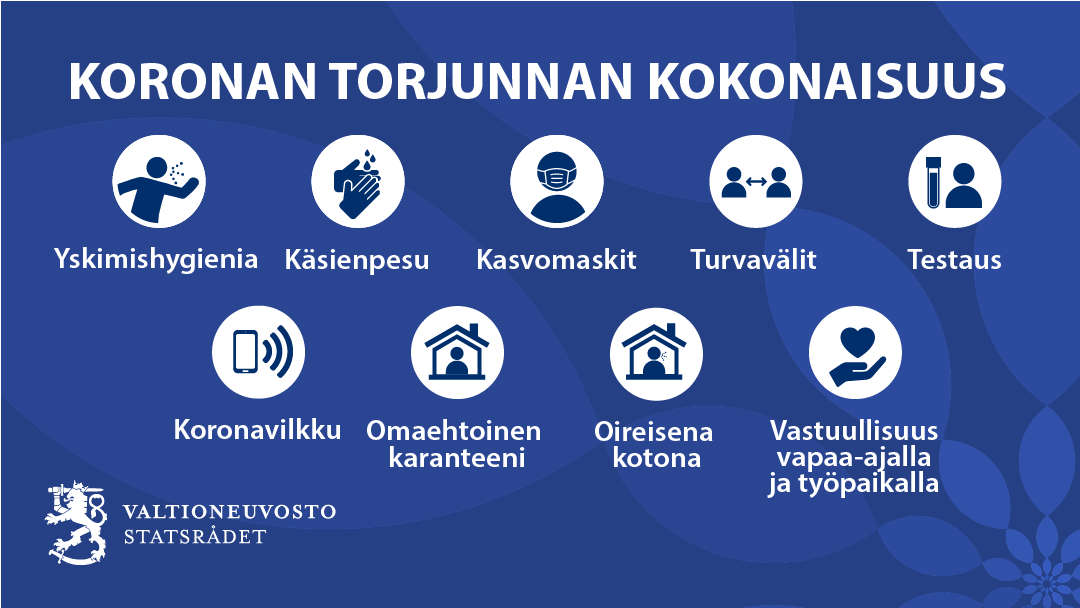 The weekly number of new COVID-19 cases has increased significantly in Finland over the past month. The incidence of cases is growing sharply and the percentage of positive samples of those tested continues to increase. The source of infection is unknown in more than half of all new cases.

On 7 October 2020, regions gave their own overall assessments of the development of the epidemic during the period of 28 September – 4 October. The assessments were made under the direction of the relevant hospital districts. Based on these assessments, the situation has deteriorated in five areas. The Hospital Districts of Helsinki and Uusimaa, Kanta-Häme, Pirkanmaa, Southwest Finland and South Ostrobothnia have entered the acceleration stage of the epidemic, according to their own assessments. The Vaasa Hospital District has reported that in its area the epidemic has reached a stage of spreading.

During the period of 28 September – 4 October, about one fifth of all new cases in Finland were reported among people already in quarantine. In most cases, the virus had spread within families, at food and beverage service establishments and through leisure-time activities. A large number of people had also contracted the virus in other situations during their spare time, for example when travelling in Finland or attending a private party, particularly a student party.

Between 28 September and 4 October, a total of 149 mass exposures were reported throughout Finland. More than half of these occurred at educational institutions and daycares or through leisure-time activities and about 10 per cent at restaurants, bars and nightclubs. Although numerous large-scale mass exposures have occurred at schools, daycares and educational institutions, they have resulted in only isolated instances of further infections.

More and more cases with unknown source of infection

Currently, the estimated basic reproduction number is 1.45–1.65, with a 90 per cent probability. This is at the same level as the week before.

Between 28 September and 4 October, the vast majority of the confirmed cases were of domestic origin. Only less than five per cent of the cases were of foreign origin, and they have caused virtually no further infections.

A sharp increase in the number and incidence of cases

At present, the testing capacity of laboratories is about 20,000 samples per day. The number of conducted COVID-19 tests continues to be high in relation to the population, although the numbers of tests have decreased slightly. During the latest period, 9,000–13,000 tests were analysed daily. The percentage of positive COVID-19 cases of all those tested has increased for a month now; during the period of 28 September – 4 October, the figure was 1.4 per cent.

On 7 October 2020, the total number of confirmed cases in Finland was 11,049. There have been 346 deaths related to the disease. It is estimated that about 8,500 people, which is around 75 per cent of all confirmed cases, have recovered from the disease.

On 7 October 2020, a total of 31 patients were receiving hospital care due to the COVID-19 disease. Five of them were in intensive care.

The background information of the report on the development of the epidemic, which is issued weekly by the Ministry of Social Affairs and Health and the Finnish Institute for Health and Welfare (THL), is based on the information reported by all hospital districts in Finland and the City of Helsinki. The information covers about 1,100 cases between 28 September and 4 October.
The most recent weekly report of the situational picture and modelling group as well as previous reports are available on the website of the Finnish Institute for Health and Welfare.