Who should receive the next International Gender Equality Prize? Nominate your candidate today! 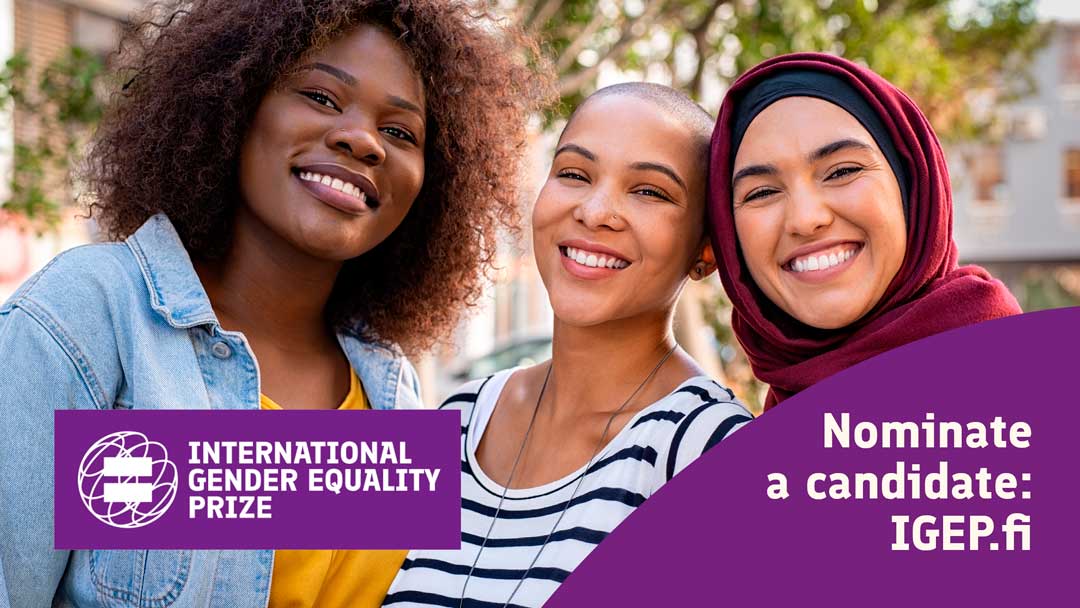 The third International Gender Equality Prize will be awarded at the end of 2021. We are now accepting nominations for the next recipient. Anyone and everyone can submit a proposal.

The prize will be awarded to a person or actor who has promoted gender equality in a globally significant way. The prize amounts to EUR 300,000, which the recipient will assign to a cause that strengthens gender equality.

“Finland is a frontrunner in the promotion of gender equality and one of the leading countries when it comes to advancing equality. It is of vital importance to be consistent in our ongoing work to strengthen gender equality. With this prize, we want to advance international discussion on equality matters and to show how Finland has managed to create sustainable wellbeing and strengthen democracy,” says Minister for Equality Affairs Thomas Blomqvist.

The winner of the prize will be selected by a jury of international experts. In 2021, the members of the international jury are Eva Biaudet, Member of the Finnish Parliament and chair of the jury; Melanne Verveer, former US Ambassador for Global Women's Issues and Executive Director of the Georgetown Institute for Women, Peace and Security at Georgetown University; Dean Peacock, Director of the Women's International League for Peace and Freedom's initiative to confront militarized masculinities; Matti Vanhanen, Minister of Finance of Finland; and Bella Forsgrén, Member of the Finnish Parliament.

The Finnish Government launched the IGEP in 2017

The prize was established in 2017 in honour of the 100th anniversary of Finland’s independence. The first prize was awarded to Federal Chancellor of Germany Angela Merkel, whose life’s work has made her one of the world’s most influential people and an example to many women and girls. Merkel granted the prize money to SOS Femmes et Enfants Victimes de Violence Familiale, a Nigerien civil society organisation that used it to build a residential shelter for victims of domestic violence in the Nigerien capital of Niamey.

In 2019, the prize was awarded to Equality Now, an organisation with a history of 27 years of globally effective work to defend the rights of women. The organisation aims, among other things, to change gendered norms both nationally and internationally and to change discriminating laws and practices.

Please submit your nomination in English.

The International Gender Equality Prize is awarded biennially.  The award ceremony will be organised in cooperation with the City of Tampere and held at Tampere Hall.