Reform aims to encourage both parents to take family leave 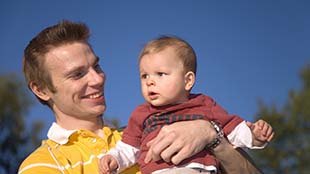 The Ministry of Social Affairs and Health is preparing to reform family leave under Prime Minister Marin's Government Programme.

The reform will be implemented in such a way that treats everybody equally, including diverse families and takes into consideration various forms of self-employment and entrepreneurship.

The objectives of the reform are:

Families will have more opportunities for flexibility and choice in the way they take their family leave.

According to the Government Programme, in the future both mothers and fathers will be entitled to an equal quota (of months) of family leave. Earnings-related leave allocated to fathers will be increased without reducing the share currently available to mothers. Family leave must also include a period of freely chosen parental leave.

The reform is being prepared in a tripartite working group

The reform of family leave will be implemented in cooperation with social partners. Preparations for the reform will primarily be made by public officials in a tripartite, unofficial working group.

The working group will be chaired by Director Liisa Siika-aho from the Ministry of Social Affairs and Health.

Stakeholders in the fields of equality and non-discrimination, as well as child and family organisations, will be consulted during the preparation process.

The reform is scheduled to come into force in 2021 at the earliest.