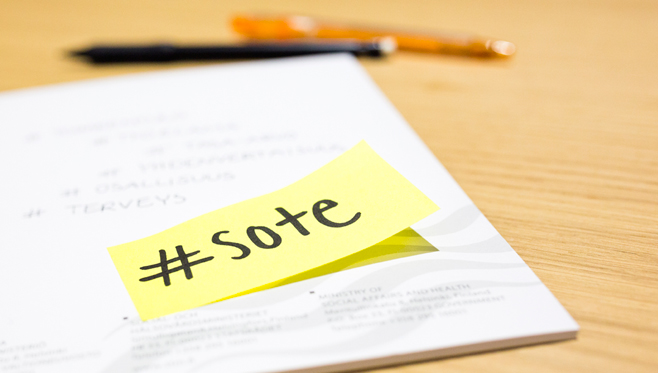 The final report on a separate study concerning possible special arrangements for health and social services in Uusimaa, the Greater Helsinki region or Helsinki proposes that further preparation be based on a model where healthcare and social welfare as well as rescue services would be organised in four autonomous regions and the City of Helsinki. The primary responsibility for organising specialised medical care would also rest with these regions. The report will be circulated for comments in January.

Different alternatives for special arrangements for health and social services in Uusimaa, the Greater Helsinki region or Helsinki were examined in close collaboration with the municipalities located in the area and the Helsinki University Hospital in autumn 2019. The study examined the grounds and constitutional preconditions for possible special arrangements, as well as the options for implementing such arrangements.

The model based on joint municipal authorities, as proposed by the municipalities of Uusimaa, was considered problematic from the perspective of the Constitution and funding, because it does not correspond to the national model referred to in the Government Programme. The now proposed solution, however, builds on the division into regions that is based on the municipalities.

The proposed solution would take account of the special characteristics of Uusimaa, and as a whole, the change would be the easiest to manage. Funding was not covered by the study.

“It is very important that account was taken of the special characteristics of Uusimaa in the preparation of the health and social services reform. When taking into consideration the national model and the strict constitutional preconditions, the special arrangements proposed on the basis of the model put forward by the municipalities last spring are a better and more risk-free alternative than the entire Uusimaa as a single county. We look forward to drawing on good partnership and engaging in close dialogue also during further preparation,” says Mayor of Helsinki Jan Vapaavuori.

Minister of Local Government Sirpa Paatero is pleased with the outcome of the study.

Many aspects of the proposals still need to be further discussed. During further preparation, it is important to take account of the general impact on both local government finances and the conditions for long-term sustainable growth in Uusimaa and across the country. A decision on how to implement the model from the legislative point of view will be made when the legislative package concerning the health and social services reform is drafted.

Minister of Family Affairs and Social Services Krista Kiuru, who is the chair of the working group set up to conduct the study, acknowledges the hard work of all those involved in the study but, at the same time, reminds that the work continues.

“The Government Programme states that the Government will conduct a study by the end of this year on special arrangements for Uusimaa, the Greater Helsinki region or Helsinki, in cooperation with the municipalities located in the area. We have now done this. On my own behalf and on behalf of the Government, I would like to thank the members of the steering group for all the hard work and good collaboration. There is still work to be done, and collaborative efforts are also needed during further preparation.