The Government appointed State Secretaries to the Ministers 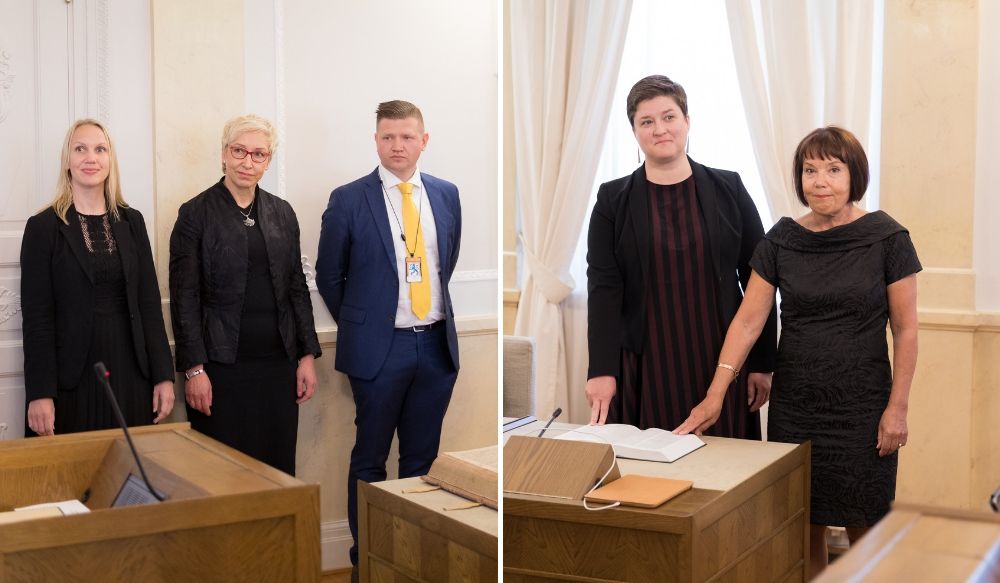 At the same Plenary Session, State Secretary Ruuth and Mäkipää made an affirmation of office and State Secretaries Aula, Brännkärr and Koskinen took an oath of office.

Before the appointment as State Secretary, Saila Ruuth has worked in the Finnish Industrial Union as an expert in social affairs and working environment, in Woodworkers Union as a secretary for equality and social affairs, and as Secretary General of the Youth Organisation Subsidy Committee. She has also worked in the employment pension company Ilmarinen and as Member of Parliament’s personal assistant.

Eila Mäkipää comes to the Ministry of Social Affairs and Health from the Parliament, where she has served as a Committee Counsel, Deputy Secretary General, Parliamentary Secretary and Deputy Parliamentary Secretary. She has also worked at the European Parliament, as Senior Ministerial Adviser and Senior Officer for Legislative Affairs at the Ministry of Justice, and at the Helsinki Court of Appeal, Helsinki City Court and National Research Institute of Legal Policy.

Maria Kaisa Aula comes to the Ministry of Finance from the Ministry of Social Affairs and Health where she held the post of a Project Director. Before this, Aula has served as Ombudsman for Children, Special Adviser to the Prime Minister and Member of Parliament. She has studied social sciences at the University of Helsinki and Harvard University and holds the title of Honorary Doctor awarded by the University of Jyväskylä.

Malin Brännkärr comes to the Ministry of Justice from the municipality of Kronoby, where she has served as the Chief Executive since 2016. Before this, she has served as Senior Adviser of the Swedish Parliamentary Group, Special Adviser of the ministerial group of the Swedish People's Party, Special Adviser to the Minister of Justice and Member of Parliament’s personal assistant.

Before the appointment to the Ministry of Transport and Communications, Mikko Koskinen worked as the Head of Political Planning of the Social Democratic Party. He has also worked in the Central Organisation of Finnish Trade Unions SAK as Head of Education and Training and as Special Adviser to Minister.

State Secretaries assist the minister in matters relating to political steering and preparatory work. They also assist and represent the ministers in the drafting of policy outlines and in inter-ministerial coordination, harmonising of policy positions, implementation of the Government Programme in the minister's administrative branch, and handling of EU and international affairs.